This is based on a presentation I just gave for a course I am currently taking on the history and development of psychology as a discipline.  My presentation was about Wilhelm Wundt and in particular his definition of psychology, but to understand Wundt we need to do a little history of philosophy, beginning with John Locke:

Locke proposed a theory we now know as the Representational Theory of Perception.  The theory is best understood, I think, by making an analogy.  So imagine you are holding a digital video camera, specifically the kind that has the little panel sticking out the side with an LCD screen on it that shows you what you are filming.  Now you point that camera at something in your vicinity and you look at the screen.  What is happening is that the light form the object you are viewing is entering the lens of camera.  Then the camera is turning that light into an electronic signal and sending that signal to the display where it is transformed again into the image that you see there. That image is a two-dimensional representation of the object you are filming.  And that in a nut-shell is what Locke proposes.  Our minds take the sensory input that we receive from the outside world and turn that into representational images, which is what makes up our actual perceptions of the objects.

To help illustrate this, here is a goofy diagram I made for the class: 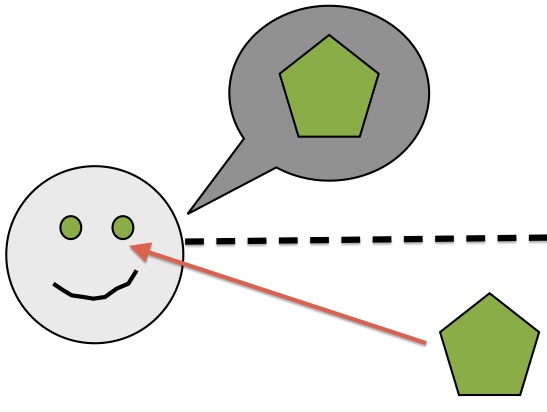 What’s important to keep in mind is that Locke sees our mental perceptions and the objects they represent as mirroring one another, represented by the line of dashes in the diagram.  This is important because this is the point that Hume will quibble over, with drastic consequences.  When Hume makes his famous arguments against the common notion of causation, he is using cause and effect and as example to illustrate a greater skeptical problem.  That problem can be put, in light of our analogy of the camera, this way:  when I film something I can see the object I am filming and see the image on the screen and thereby know that the screen reflects the object it is representing.  But what if I could only see the screen?  How could I actually know that it mirrored the object it was supposed to be representing?  What Hume suggests through the skeptical questions he raises is that we don’t actually have any way of knowing this.  In fact, Hume seems to make the alarming suggestion that for all we know, the objects and associations that we perceive in our minds could be completely random and not reflect anything at all!

Goofy diagram according to Hume: 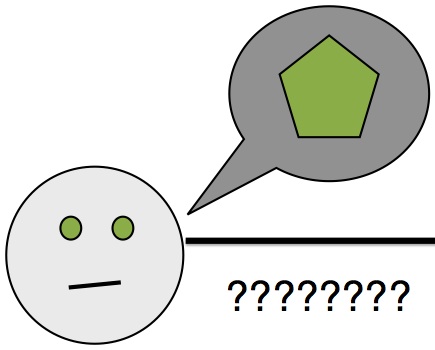 This alarming suggestion is what motivates Kant’s epistemological system.

Kant wants to argue that even if we don’t know what the objects out there beyond our perceptions are actually like, we can still rely on our perceptions, even use them as the empirical data needed to do science.  Kant’s argument turns on adding another dashed line into the diagram, this one marking off a demarcation between experienced phenomenon and the experiencing subject.  Kant’s claim, in effect, is that whatever happens when we process whatever inputs we get from this unknown realm of out there, it happens in a systematic way so as to create orderly, recognizable, and even systematizeable phenomenon that we perceive.  Because of the systematic way that our perceptions arise we can use these perceptions as the basis for empirical science, recognizing two limits of knowledge:  first, we will never know the objects in themselves and second, our perceptions of the objects are always subjective in the sense that they arise out of a perceiving subject and its processes of cognition.

Goofy diagram according to Kant:

By the time Wundt comes around Kant’s ideas have been in the air for well over a century (and by this time reinterpreted by such notables as Hegel and Schopenhauer), so even though Wundt doesn’t have much nice to say about Kant, in particular singling out some of Kant’s specific statements about psychology as a science,  Wundt is very much a Kantian.

Wundt starts out by dismissing two popular definitions of psychology, one which limits psychology to studying the mind as a metaphysical entity consistent with older, Platonic conceptions and another which limits psychology to studying inner experience primarily through self-reflective introspection.  In response to both of these Wundt shows the influence of Locke, Hume, and Kant.  The first definition Wundt dismisses because it is too laden with metaphysical content which cannot be grounded in empirical experience (a la, Locke and Hume).  The second definition Wundt dismisses by essentially arguing that the distinction between inner and outer experience is arbitrary because both arise form the same perceiving subject (a la Kant).

First, he denotes natural science as an empirical discipline which seeks to abstract away from the perceiving subject.  While natural science cannot ever come upon the objects-in-themselves it can produce a systematic understanding of our experience of the world by attempting through abstraction to remove the influence of the subject on the interpretation of empirical data.

In contrast to this, Wundt proposes that psychology works from the same data inward, working toward the understanding both of the subject and of how the phenomenon it experiences have arisen from it.  He calls this the “science of immediate experience,” which is to say it is a science which interprets our experience as it is immediately present to us without trying to remove our self from that experience.  He also goes on to make a jab about psychology thus being actually more true to the aim of an empirical science because it does not add in layers of abstraction to the interpretation of experience.

Goofy graphic according to Wundt:

All of this is significant and important, I think, for two reasons.

First, returning to Kant, I think that the insertion of the perceiving subject, which is also known as the self, into the equation drastically changes the ball-game for epistemology because, as I have argued many times before, it makes the project of knowing perspectival.  Like Wundt, I believe that we must work from perceived phenomenon with the understanding that these perceptions always depend on the perceiving subject.  While it is possible to abstract away from the subject toward more conceptual statements about experienced phenomena, we cannot ever make the claim that we know these abstractions to reflect the things in themselves, they are always only our best approximations based on our perspectival experience.

Second, what Wundt proposes as the goal of psychology, namely analyzing the relationship between our perceptions and the subject that perceives them via scientific experimentation, functions effectively as epistemology given the Kantian paradigm.  If we can study the processes that give rise to our perceptions of the world then we can glean a great deal of knowledge about how it is that we come to believe the things that we believe, what exactly the systematic structures are that guide our understanding.  In this way, Wundt is I think pre-figuring a lot of what happens in Cognitive Psychology today (though certainly the experimental methods of cognitive psychology have moved far beyond him).  Furthermore, since this version of epistemology involves a heavy degree of interpretation of the self and its experiences, it can also be described as a hermeneutical project.  Thus, what I think Wundt proposes is that experimental psychology can function as the foundation of post-Kantian epistemology and hermeneutics.  Whether or not his project is fully successful is of course up for debate, but I think this idea has major implications for the shape of both philosophy and psychology in the present day.

One thought on “Locke, Hume, Kant, Wundt, and Psychology as Epistemology”