As expected, the election last night went to President Barak Obama.  Also as expected, he won a narrow margin in the popular vote and the Democrats gained ground in Congress (though Republicans will continue to control the House).  Congrats to friends of mine who worked on races, especially in Massachussetts and Connecticut.  Another friend of mine is counting votes in Arizona for a congressional race that is still too close to call.  Best of luck to her and her team!

This should hopefully be the last political post on this blog for a good long while.  To recap, here is my prediction from Monday:

And here is the actual outcome:

The rubric for these maps is (based on most recent information available to me):

I was off in a few states about the margin of victory, but my predictions of who would win each state were all correct with the possible exception of Florida, which has still not been called but appears to be leaning toward President Obama, giving him a larger victory than I anticipated.

One more map this week.  This is the map putting every state won by 10 or fewer points back in the “toss-up” column: 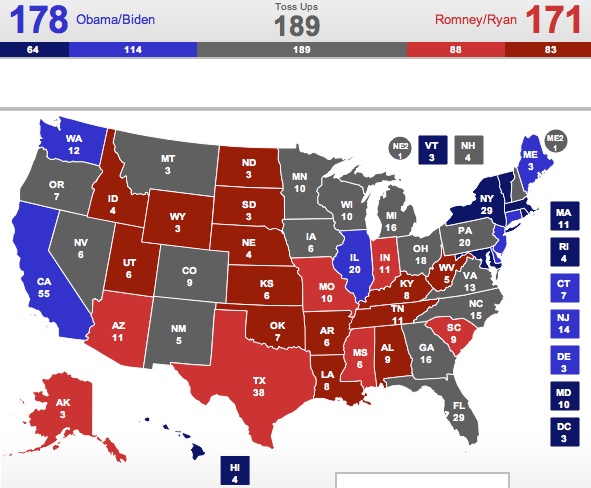 What I want to show by this map is that the electoral college is not as locked down as people commonly assume.  The suggestion that I have heard is that the election was only decided by a handful (between 1 and 4) of states.  I want to argue that this isn’t accurate.  States decided by fewer than 10 points could easily be swung to the other side with enough effort and political momentum, and as this map shows there are a lot of such states and they come from every region of the country.  This goes to show that the electoral landscape is still very alive and constantly shifting.  It could also be taken as an argument that the ground is ripe for an organized and effective third party to disrupt the two party system.  Food for thought, now its on to the next four years!