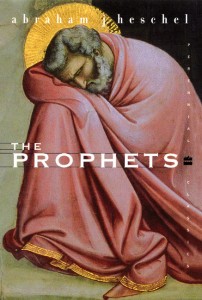 , who is quickly becoming my new favorite writer.  Reading his excellent book The Prophets

, which I highly recommend.  To give you a taste, here is a section from chapter 11 (Justice) that I find beautiful and provocative:

Why should religion, the essence of which is worship of God, put such stress on justice for man?  Does not the preoccupation with morality tend to divest religion of immediate devotion to God?  Why should a worldly virtue like justice be so important to the Holy One of Israel?  Did not the prophets overrate the worth of justice?
Perhaps the answer lies here:  righteousness is not just a value; it is God’s part of human life, God’s stake in human history.  Perhaps it is because the suffering of man is a blot upon God’s conscience; because it is in relations between man and man that God is at stake.  Or is it simply because the infamy of a wicked act is infinitely greater than we are able to imagine?  People act as they please, doing what is vile, abusing the weak, not realizing that they are fighting God, affronting the divine, or that the oppression of man is a humiliation of God.
He who oppresses a poor man insults his Maker,
He who is kind to the needy honors him.
Proverbs 14:31
The universe is done.  The greater masterpiece still undone, still in the process of being created, is history.  For accomplishing His grand design, God needs the help of man.  Man is and has the instrument of God, which he may or may not use in consonance with the grand design.  Life is clay, and righteousness the mold in which God wants history to be shaped.  But human beings, instead of fashioning the clay, deform the shape.
The world is full of iniquity, of injustice and idolatry.  The people offer animals; the priests offer incense.  But God needs mercy, righteousness; His needs cannot be satisfied in the temples, in space, but only in history, in time.  It is within the realm of history that man is charged with God’s mission.
Justice in not an ancient custom, a human convention, a value, but a transcendent demand, freighted with divine concern.  It is not only a relationship between man and man, it is an act involving God, a divine need.  Justice is His line, righteousness His plummet (Isa. 28:17).  It is not one of His ways, but in all His ways.  Its validity is not only universal, but also eternal, independent of will and experience.
People think that to be just is a virtue, deserving honor and rewards; that in doing righteousness one confers a favor on society.  No one expects to receive a reward for the habit of breathing.  Justice is as much a necessity as breathing is, and a constant occupation.